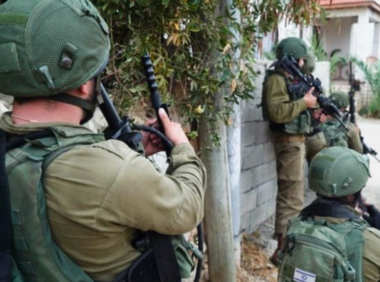 Israeli soldiers abducted, Saturday, several Palestinians near Ramallah, in central West Bank, as the military continues to search for the Palestinians who killed an Israeli teenage girl, 17, Friday, but could not confirm any relation between the detained Palestinians and the soldier.

The military said its forces, along with the Police and Internal Security agents, are ongoing with the search campaign in Ramallah, to detain any person responsible for the roadside bombs that killed Rena Shnerb, 17, and the injury of her father and brother.

It added that all abducted Palestinians have been moved to a few interrogation facilities, to be questioned by the Internal Security Services, and added that it could not confirm any connection between them and the death of the soldier.

In addition, the army said that Brigadier General Eran Niv, the commander of the military in the West Bank, held a session with senior Israeli security and military leaders to evaluate the situation and developments.