Palestinian Forced To Demolish His Home In Occupied Jerusalem 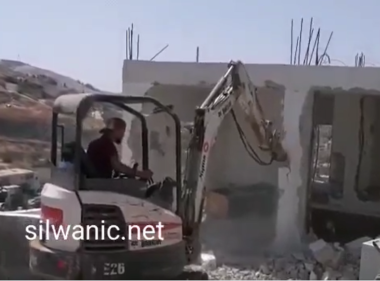 The Wadi Hilweh Information Center in Silwan (Silwanic) has reported that a Palestinian was forced to demolish his own home, Saturday, in Silwan town, in occupied East Jerusalem, to avoid the excessively high fines and fees imposed by the City Council.

Silwanic said the Palestinian, Mohammad al-Abbassi, had to demolish his home after the City Council decided to destroy the property “for being built without a permit.”

It added that the City Council informed al-Abbassi that he either demolish his home, or the city would demolish his property, impose very high fines and fees, in addition to billing him for the costs of using its workers and machines in the destruction of his property,

It is worth mentioning that, according to data from the United Nations Office for the Coordination of Humanitarian Affairs (OCHA) Israeli soldiers have demolished or destroyed 265 structures, and displaced 355 Palestinians, since the beginning of this year, displacing 355 Palestinians, while the number of displaced Palestinians since the year 1967 have reached 49.4000.