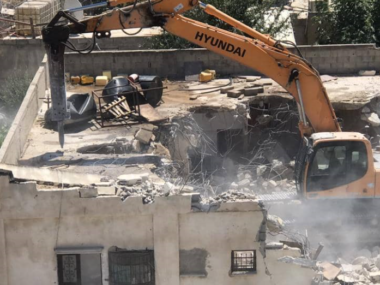 The Wadi Hilweh Information Center in Silwan (Silwanic) has reported that dozens of soldiers, police officers and undercover troops invaded al-Aqaba neighborhood in Beit Hanina and surrounded two homes owned by members of Rajabi family, after closing all roads leading to them.

Silwanic added that the soldiers forced the families out of their homes, and demolished the properties, rendering twelve Palestinians, including three children, homeless.

Ibrahim Rajabi, said he lived in his demolished home along with his wife, child, brother and sisters, and added that his other brother, and his family, lived in the second demolished property.

Rajabi stated that his demolished home was 200 square/meters, and was built fifteen years ago, and added that he and his brother have been trying to obtain all needed permits and pay the fines, and even had a hearing at an Israeli court nearly three months ago. ugh no final ruling was made, the family was surprised by the soldiers who invaded their property, forced them out and started demolishing the buildings.

The Rajabi family said that it managed to delay the demolition for two hours, after the soldiers already destroyed parts of the property, and added that the District Court in occupied Jerusalem halted the destruction.

However, the City Council in occupied Jerusalem demanded the family to pay a fine of 50.000 Shekels to postpone the demolition, and to leave the property, but the family was unable to do so, and the demolitions proceeded.