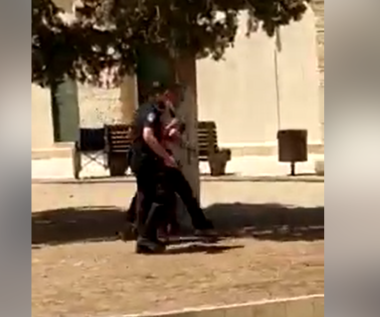 Israeli soldiers abducted, Thursday, five Palestinians, including two women and a guard of the Al-Aqsa Mosque, in occupied East Jerusalem, after dozens of soldiers, police officers and colonialist settlers invaded the courtyards of the holy site.

Firas ad-Dibis, the head of the Public Relations Department in Al-Aqsa, said the soldiers abducted one of the holy site’s guards, identified as Bader Rajabi, while working in Bab ar-Rahma Mosque, in al-Aqsa.

He added that the soldiers also abducted two women, identified as Madeleine Issa and Shifa Abu Ghalia, in addition to a young man, Habib Abu Shousha, near Bab ar-Rahma Mosque.

It is worth mentioning that the Israeli police abducted, Ashraf Abu Rmeila, the head of the evening shift of the mosque’s guards, after summoning him for interrogation on Thursday morning.