Soldiers Abduct Six Palestinians In Jerusalem, One From Jenin 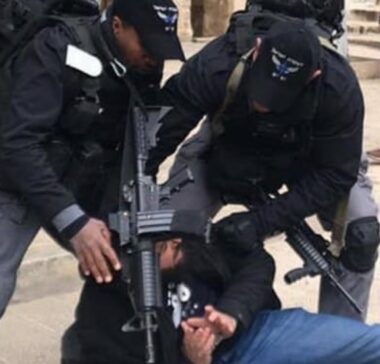 Israeli soldiers abducted, on Thursday evening, six Palestinians from several parts of occupied Jerusalem, and one from Jenin, in the northern part of the occupied territory.

The sources added that the soldiers also abducted Shadi Halasa from his home in Jabal al-Mokabber town, in addition to Zakariyya Odah, Nasser Abu Khdeir, Sa’id Abu Khdeir, Abdul-Latif Gheith, and Manaweil Abdul-‘Al from their homes in Shu’afat town, north of Jerusalem.

Furthermore, the soldiers abducted a young man, identified as Omar Wasfi Taba’ya, from Meithalun town, south of the northern West Bank city of Jenin, while crossing the al-Karama border terminal on his way back home from Jordan.

Earlier Thursday, the soldiers invaded and ransacked many homes across the West Bank, and abducted dozens of Palestinians.