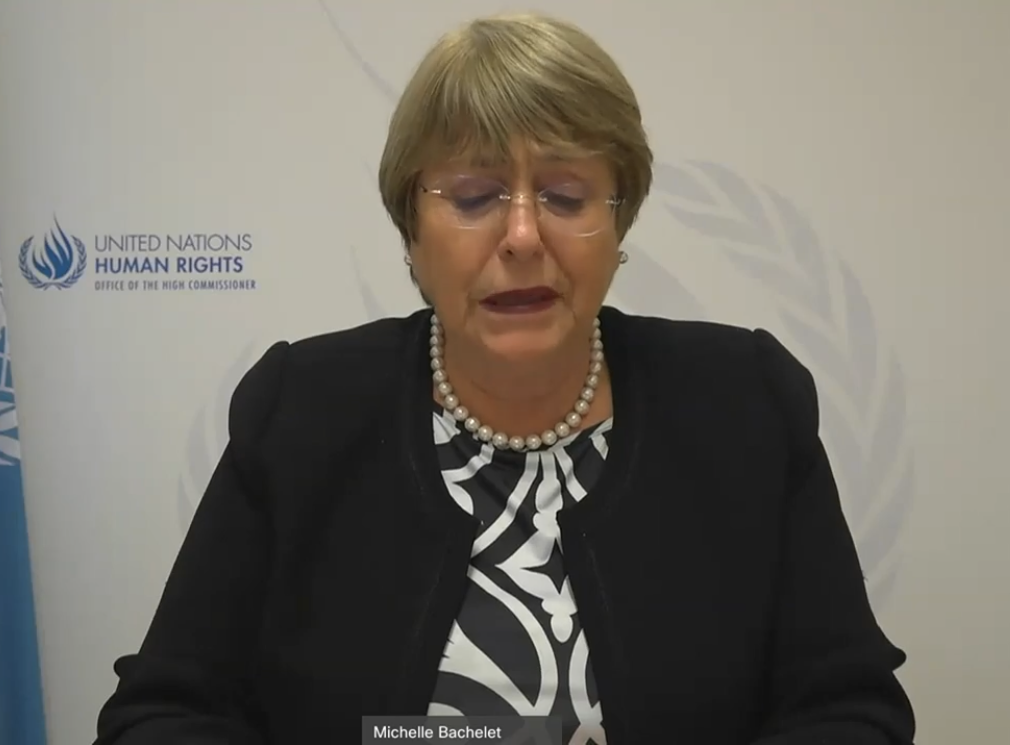 On Tuesday, December 7th, 2021, UN High Commissioner for Human Rights Michelle Bachelet gave a briefing to the UN Committee on the Exercise of the Inalienable Rights of the Palestinian People and acknowledged the situation as “disastrous” in the occupied Palestinian Territories. Her briefing outlined some of the abuses that affect some four million people in the West Bank and Gaza.

High Commissioner Bachelet focused on topics such as the situation in Gaza, Israel’s designation of Palestinian human rights and civil society as “terrorist organizations” and the impact of the “disturbing” human rights abuses on the health and safety of Palestinian children.

The Situation in Gaza

Bachelet outlined the situation in Gaza and referred to the bombing of densely populated civilian areas and widespread destruction of civilian infrastructure as they “raise serious concerns about compliance with international humanitarian law.”

She discussed also the killing of 130 civilians including 67 children in Gaza alone, during the shelling in May of 2021. The UN human rights commission decided to make a formal inquiry into all alleged violations of international human rights law leading up and since April 13th 2021. The results of the investigation will be public in June of 2022.

Bachelet stated that the Human Rights commission will be investigating “all underlying root causes of recurrent tensions, instability and conflict- including systematic discrimination and repression based on national, ethnic, racial or religious identity.”

She added however that while hostilities have diminished since the shelling of Gaza in May 2021, humanitarian conditions remain “deeply concerning.”

“In addition to the cycles of hostilities, the people of Gaza continue to suffer from a 15 year land, sea and air blockade which lead to a deeply damaging deterioration of human rights and humanitarian condition.” This briefing outlined the ways the blockade hinders freedom of movement and causes food and supply scarcity for civilians, affecting access to materials for infrastructure such as sewer system and water accessibility and acquisition of specialized health care for those in need.

Bachelet emphasized that these conditions, “generate immense suffering.” Due to the blockade, people in Gaza are “systematically deprived of the fundamental rights due to every human being.”

Additionally, Bachelet was outspoken in her criticism of Israel’s decision to designate six Palestinian human rights and civil society organizations as “terrorist” and “unlawful”, emphasizing that these organizations have been working with the international community as well as the UN for decades “collectively defending human rights and providing humanitarian assistance for thousands of people.”

Israel’s improper designation of these organizations  “can therefore legitimately be viewed as an attack on human rights defenders, on the rights to freedoms of association, opinion and expression, and on the right to public participation”, she stressed.

Bachelet expressed deep concern about violence against Palestinians perpetrated by both settlers and Israeli Armed Forces- referring to the 490 incidents this year of killing, injury or significant property damage, higher in number than in any previously recorded year by the UN, of almost one incident a day.

In a call for accountability and investigation, she mentioned that an issue of “chronic impunity” has been brought to the attention of both the Secretary-General and herself, characterizing settler violence as remaining at “alarmingly high levels.” Reports WAFA News Agency.

“Despite reports that Israeli authorities have taken steps, the justice system continues to fail to hold settlers accountable for violence against Palestinians.” Bachelet notes that this lack of accountability contributes to the “increased numbers and severity of attacks.”

Bachelet notes the sharp increase in 2021 in Israeli settlement activity across the occupied West Bank and East Jerusalem.

“Children continue to suffer a disproportionate impact from the recurrent cycles of military escalation and associated degradation. Reports by our UN partners indicate that 70% of all children in Gaza are in need of mental health and psycho-social support, as well as other community and family based services.”

Bachelet references the 160 Palestinian children that are currently detained by Israel, some without charge. Noting that under international law such imprisonment should be used only as a last resort and for the shortest appropriate time. She states also that children should benefit from a “child friendly justice system” which minimizes the harm incurred from a legal proceeding.

“It should be clearly understood that under international law, administrative detention is permitted only under exceptional circumstances and must be subjected to strict safeguards to prevent arbitrariness. This is not the case in the Occupied Palestinian Territories.” Bachelet says, in reference to the children arrested and detained by Israel, referring also to the continued reports of mistreatment of children during arrest, transfer and interrogation by Israeli authorities.

“Only an end to the occupation can bring about lasting peace and establish the conditions in which the human rights of all can be fully respected”, she added.

The full briefing can be found here.