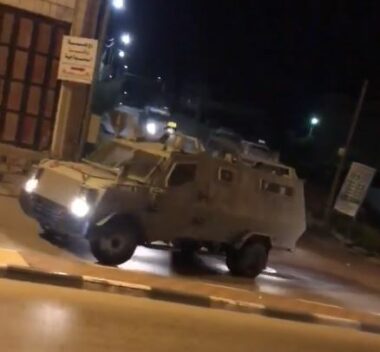 Israeli soldiers abducted, on Wednesday at night and Thursday morning, three Palestinians from Jenin and Bethlehem, in the occupied West Bank, the Palestinian Prisoners’ Society (PPS) has reported.

Montaser Sammour, the head of the Jenin office on the PPS, in northern West Bank, said several Israeli army jeeps invaded Jalboun village, northeast of Jenin, and abducted Mohammad Ahmad Ibrahim, after storming his home and ransacking it.

Sammour added that Mohammad is a student at the al-Istiqlal University in Jenin.

On Wednesday at night, the soldiers abducted a young man, identified as Nassar Osama al-‘As’as, 19, during protests that took place at the northern entrance of Bethlehem city.

In related news, the soldiers abducted a Palestinian political prisoner from occupied Jerusalem, instantly after his release from prison after he spent nearly seven years in prison.