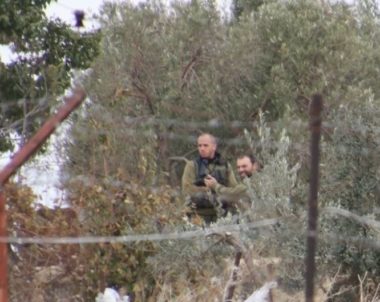 Israeli soldiers abducted, on Sunday at dawn, three young Palestinian men in Bethlehem and Hebron governorates, in the occupied West Bank, during extensive and violent searches of homes.

The soldiers invaded and ransacked homes in Teqoua’ town, southeast of Bethlehem, and interrogated Palestinians while inspecting their ID cards.

Media sources said the soldiers abducted Mazen Jamal Sha’er, 16, and Osama Ali Abdullah, 22, from their homes in the town.

The soldiers also tried to ambush several Palestinians in the al-Baq’a Meadow area, west of Teqoua, and fired live rounds at them, before withdrawing.

In addition, the soldiers invaded and searched many homes in villages and towns in the southern West Bank governorate of Hebron, in addition to closing the iron gate at the main entrance of the al-Fawwar refugee camp, south of the city.

In Qalqilia, in northern West Bank, the soldiers invaded Azzoun town, east of the city, and attacked with live round many protesters who hurled stones and a few Molotov cocktails at them.

In related news, the soldiers abducted sixteen young Palestinian men from their homes, in the al-‘Isawiya town, in occupied East Jerusalem, and summoned several others for interrogation.