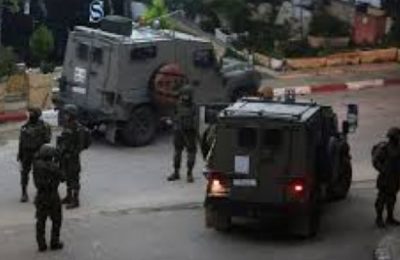 Israeli soldiers abducted, on Thursday at dawn, twelve Palestinians, including a former Legislative Council member, from their homes, in several parts of the occupied West Bank.

The Palestinian Prisoners’ Society (PPS) has reported that the soldiers invaded and ransacked dozens of homes across the West Bank, before abducting the twelve Palestinians, including a former legislator.

It is worth mentioning that, prior to today, Jarrar was abducted and imprisoned by Israel two times since 2015, spending around three years in prison, including being held under the arbitrary and illegal Administrative Detention orders, without charges or trial.

Detainee Ali Jaradat is also a former political prisoner, who was abducted and detained by Israel dozens of times since the 1970’s.

In Nablus, in northern West Bank, the soldiers abducted Ahmad Ali Sabri, from his home if Kafr Qalil village.

In occupied Jerusalem, the soldiers abducted a civilian guard of the Al-Aqsa Mosque, identified as Samer al-Qabbani.

On Wednesday evening, the soldiers abducted a child, identified as Mohammad Kleib, 14, from the al-‘Isawiya town, in Jerusalem, after assaulting and wounding him.