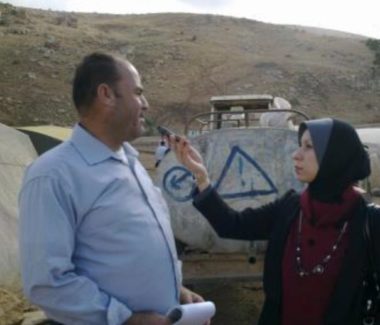 Israeli soldiers abducted, Thursday, Palestinian human right activist, Aref Daraghma, after stopping him at a military roadblock, while heading to the northern part of the occupied West Bank.

Mo’taz Bisharat, a Palestinian official responsible for the Plains bureau in Tubas, in northeastern West Bank, said the soldiers, stationed at a military roadblock, east of the city, abducted Aref Daraghma, while heading to the Northern Plains of the West Bank.

Bisharat added that the soldiers cuffed took Daraghma to an unknown destination. The abducted Palestinian is a well-known Palestinian human rights defender.

On Thursday at dawn, the soldiers abducted twelve Palestinians, including a former legislator, from their homes, in several parts of the West Bank, including occupied Jerusalem.

On Wednesday evening, the soldiers abducted a child, identified as Mohammad Kleib, 14, from the al-‘Isawiya town, in Jerusalem, after assaulting and wounding him.