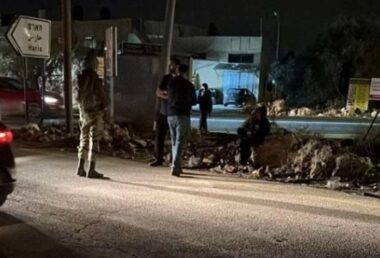 On Monday evening, Israeli soldiers assaulted and abducted two Palestinian children, and injured one girl, while playing in front of their homes in Hares town, west of Salfit in the central West Bank.

Resident Ala’ Daoud said the soldiers invaded the town and assaulted Omar Suleiman Daoud, 8, and Thabet Osama Najjar, 7, before abducting him and taking him to a nearby military roadblock.

Daoud added that the families have been trying to convince the soldiers to release the children, but they continue to refuse and are trying to move them to a detention facility. 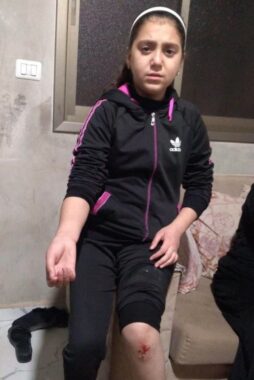 Furthermore, the soldiers assaulted a girl, Marah Ala’ Daoud, 9, causing several injuries, especially to her arms and legs, before she was moved to a hospital.

The soldiers chased and attacked the children in front of their homes at the town’s main entrance, wounding Marah before abducting Omar and Thabet.

Also Monday, the soldiers abducted six Palestinians, including a child, from Tubas, Qalqilia, Tulkarem, and Hebron, in the occupied West Bank.

The soldiers also abducted four Palestinians at a military roadblock west of Nablus, in the northern part of the occupied West Bank.

Furthermore, the soldiers abducted a teenage girl while visiting her brother, imprisoned at the Eshil prison in Be’er As-Sabe’ (Beersheba).