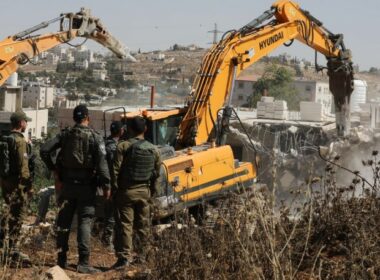 HEBRON, Monday, November 28, 2022 (WAFA) – The Israeli occupation forces today demolished two Palestinian-owned houses to the east of the occupied West Bank city of Hebron and ordered the demolition of an elementary school in Masafer Yatta, south of Hebron.

Aref Jaber, an activist, told WAFA that each house was 120 square meters in area and inhabited by 12 people, who have now become homeless.

Residents of the area told WAFA that the ongoing Israeli violations against their houses, lands and farms, aim to force them out of the area in order to expand the settlement of Kiryat Arba, which is built on land seized from Palestinians.

Meanwhile, the Israeli military issued a demolition order against a school in Khashem al-Karm community in Masafer Yatta, in the South Hebron Hills.

Fouad al-Imoor, an activist, said that Israeli soldiers raided the area and delivered the demolition order against the school to be carried out within 96 hours.

He added that the elementary school contains five classrooms and serves 35 school students from the community and others nearby.

Last week, the Israeli military demolished the Isfey elementary school, funded by donor countries and also located in Masafer Yatta, where 32 students were getting an education.