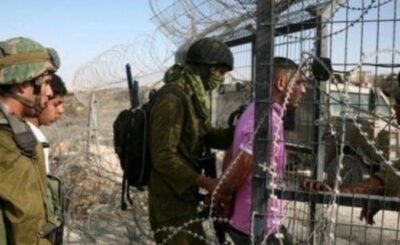 On Friday night, Israeli soldiers abducted two Palestinians on their lands near the perimeter fence in the central district of the besieged Gaza Strip.

Media sources said the soldiers, stationed on military towers across the fence, fired several rounds at the two Palestinians before abducting them.

The sources added that the army fired many live rounds at farmers and workers near the central and southern Gaza Strip perimeter fence, forcing them to leave their lands.

On Friday, the soldiers abducted three Palestinians on their lands near the perimeter fence east of Khan Younis, in the southern part of the Gaza Strip.