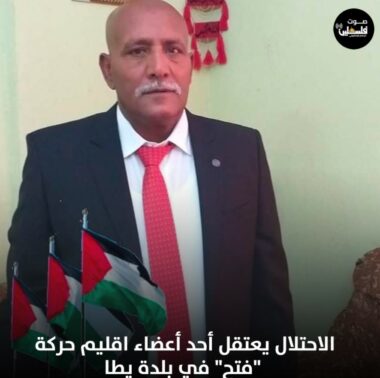 Israeli soldiers abducted, on Sunday at dawn, a senior political leader of the Fateh movement in Hebron, in southern West Bank, and a young man in Bethlehem, south of occupied Jerusalem in the West Bank.

They added that Shawahin is a member of the Regional Council of Fateh movement in Yatta.

The soldiers also installed roadblocks in several areas of the Hebron governorate, before stopping and searching cars, and interrogated many Palestinians while inspecting their ID cards.

The army also invaded Beit Jala city, west of Bethlehem, and abducted a young man, identified as Ibrahim Roumi, after the soldiers stormed his family’s home and ransacked it.