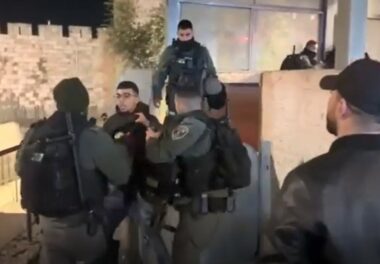 Eyewitnesses said the soldiers invaded the Bab al-Magharba area in the town before stopping and interrogating many Palestinians while inspecting their ID cards.

They added that the soldiers abducted two young men, Yousef Salah and Ali al-Abbasi, before moving them to an interrogation facility in the city.

In related news, the soldiers detained lieutenant Azzam Jabara, the head of the Palestinian Police in Jerusalem suburbs, and his aide while heading to Salfit in the central West Bank.

The soldiers detained the two Palestinians near the illegal Ariel colony and interrogated them for several hours.