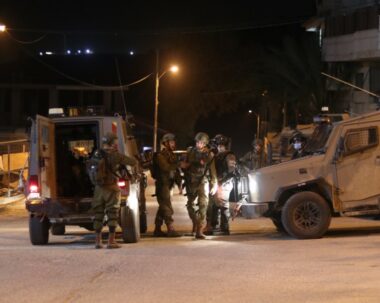 In Nablus, in the northern West Bank, the soldiers invaded the al-Lubban ash-Sharqiya village, south of the city, and abducted Jihad Ayman Oweiss, 22, after stopping him and searching his car.

Many Palestinians protested the invasion and hurled stones at the soldiers who fired live rounds and gas bombs.

In Tubas city, in the northeastern West Bank, undercover Israeli soldiers kidnapped Fadi Daraghma after ambushing him in front of his home. The army has frequently tried to abduct the young man during previous invasions.