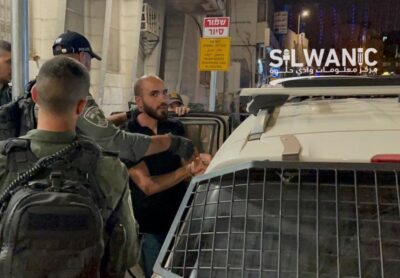 Hundreds of Israeli colonizers marched from the Bab al-Amoud area in the Old City while carrying Israeli flags and chanting racist slogans, calling for removing the Palestinians from Jerusalem and denying the Muslims access to the Al-Aqsa Mosque.

Dozens of Israeli soldiers accompanied large groups of colonizers into the courtyards of the Al-Aqsa Mosque and abducted ten young men.

The Wadi Hilweh Information Center In Silwan (Silwanic) said the soldiers assaulted and injured an elderly Palestinian man, Mousa Hijazi. and prevented dozens of schoolchildren from entering the courtyards of Al-Aqsa.

Silwanic added that the army surrounded the holy site’s courtyards, closed its gates, prevented hundreds of Palestinians from reaching it, and assaulted dozens of Palestinians, including elders, women, and children.

The Palestinian Red Crescent Society (PRCS) said the soldiers prevented its medics from entering the courtyards of the holy site and attacked its crews in the Old City while trying to reach a wounded young man on the al-Wad Street.

The PRCS stated that its medics provided treatment to seventy-nine Palestinians, including one who was shot with live ammunition.

It added that 78 Palestinians were injured, mainly after being shot with rubber-coated steel bullets. The others sustained injuries due to gas bombs or after being maced with pepper spray, and those who suffered various cuts and bruises.

The PRCS medics provided the needed treatment to the wounded Palestinians and moved twenty-eight of them to several hospitals in occupied Jerusalem.

The colonizers also invaded the Sheikh Jarrah neighborhood in Jerusalem, caused damage to many Palestinian cars, hurled hurling stones and empty bottles, and fired live rounds at many homes.

They also attacked and caused damage to many homes in the Bab al-Magharba area in the Old City.

Also, the soldiers closed Bab as-Sahera, Salahuddin Street, and the al-Misrara neighborhood and assaulted many Palestinians who carried Palestinian flags and chanted for liberation and for ending the escalating Israeli violations against the Al-Aqsa Mosque and every part of occupied Palestine.