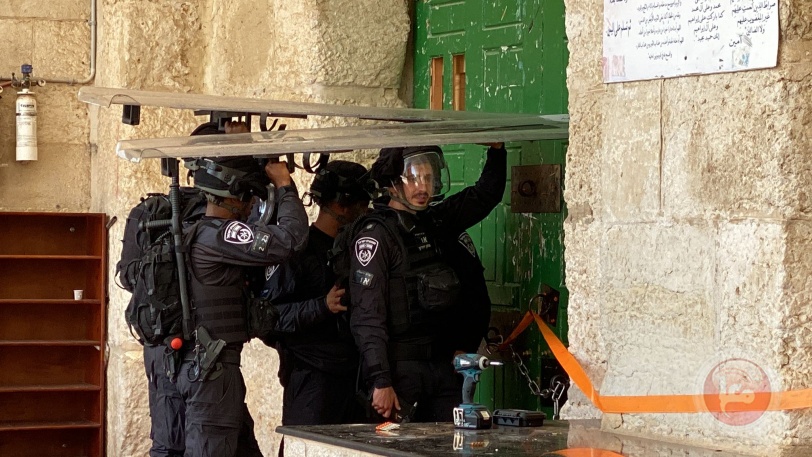 Beginning at 7 am on Sunday, dozens of right-wing Israeli paramilitary settlers, led by the extremist Itamar Ben Gvir and accompanied by squadrons of Israeli soldiers, stormed the courtyards of Al-Aqsa Mosque, removing Palestinian worshipers who were there for the morning prayer, and invading the sanctuary spaces to force out the Muslims who were peacefully praying there.

Israeli troops accompanied the right-wing Jewish settlers in their provocative invasion of the mosque compound, and installed checkpoints in addition to violently assaulting the Palestinian Muslim worshipers.

Israeli TV reported that Itamar Ben Gvir will lead or be present in the “Flags March” that Israeli right-wingers are planning for later on Sunday. Ben Gvir is known for his sharp hostile stances towards the Palestinians. Earlier this year, he set up a temporary parliamentary office in the Sheikh Jarrah neighborhood of East Jerusalem, accompanied by dozens of settlers, which led to violent confrontations with the Palestinians living in the neighborhood.

The soldiers closed the al-Qibly mosque in the Al-Aqsa compound, closed the door with iron chains, broke its windows, and attacked worshipers both in and around the mosque, and abducted many of them.

Israeli undercover forces were also part of the invasion. They attacked Palestinian worshipers, including women, and forced a Turkish woman out of the mosque.

Israeli right-wing Jewish extremists decided to invade Al-Aqsa Mosque on the anniversary of what they call the “unification of Jerusalem”, which is the day that the Israeli military began its occupation of the city of Jerusalem in 1967, forcing out many of the indigenous Palestinian residents of the city – an expulsion which is still ongoing until today.

The Israeli forces deployed to the mosque at the time when Palestinians were gathered for the dawn prayer. They first attacked the mosque at the Mughrabi Gate Square, then advanced towards the Al-Qibly prayer hall, completely surrounding it and closing its doors, while hundreds of Muslim worshipers were attempting to enter the mosque for prayer.

The Israeli soldiers also prevented many young men from entering the mosque. The men who were prevented from entering performed prayers at the gates of Al-Aqsa, while the soldiers continued to surround them.

The soldiers abducted many Palestinian worshipers, and forced others out with force. Meanwhile, busloads of right-wing Jewish settlers arrived at the mosque, in a provocation aimed at angering Muslims around the world. The leaders of the right-wing Jewish settlers, including Itamar Ben Gvir, have called for the destruction of the Al-Aqsa Mosque in order to build a Jewish temple in its place.

Hundreds of Israeli settlers invaded the mosque through the Mughrabi Gate, which is an ancient gate that has been under the control of the Israeli authorities since their invasion of the city in 1967.