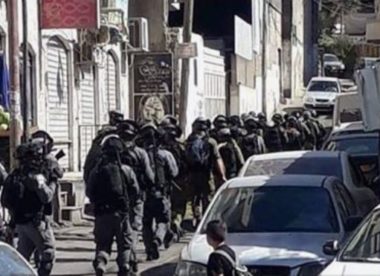 The invasion was carried out by many army vehicles, before the soldiers stopped and abducted two young men.

Local sources said the soldiers abducted the two young men after the army installed roadblocks, stopped and searched dozens of cars, and interrogated many Palestinians while inspecting their ID cards.

They added that several shop owners had to close their stores, to avoid being invaded and ransacked by the soldiers.

The army also fired many gas bombs and concussion grenades at the Palestinians in the streets, in addition to targeting a few homes.

It is worth mentioning that the army, along with the City Council of occupied Jerusalem, has been targeting the refugee camp, and all surrounding neighborhoods and areas, as part the ongoing campaign to shut down offices run by the UNRWA, especially educational and health facilities.

The Israeli campaign against the Palestinian refugees, and the denial of their rights, have also caused further suffering to them, especially after the U.S. stopped the funding of the UNRWA, while mutually working with Tel Aviv to deny and void their rights.

On Monday at dawn, the army abducted at least nine Palestinians, including a woman and a journalist, from their homes in several parts of the occupied West Bank, while many illegal colonialist settlers wrote racist graffiti and punctured tires, near Ramallah.