Soldiers Abduct Two Palestinians, Including A Woman, In Ramallah And Jericho 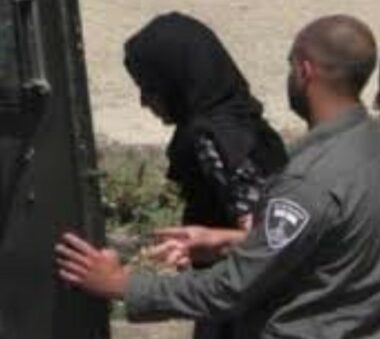 Israeli soldiers abducted, Tuesday, two Palestinians, including a woman, in Ramallah and Jericho, in the occupied West Bank.

They added that the soldiers smashed the doors of many apartments in the building before searching and ransacking them and detained the families in the lower level during the invasion, before abducting Abdul-Rahman Mahmoud Tawil, 20.

The soldiers also confiscated surveillance recordings and equipment in the invaded apartment building.

In Jericho, in northeastern West Bank, the soldiers invaded the Zbeidat area, north of the city, and abducted a woman, identified as Samaher Atiya Zbeidat, 40, after storming her home and searching it.

It is worth mentioning that Samaher is a mother of an infant, only one month of age, and two of her sons, identified as Ahmad and Fathi, were abducted by the army a week ago.

She also has high blood pressure, and a nervous breakdown she suffered when the army stormed her home and abducted her two sons.