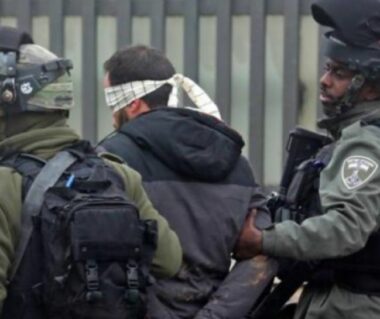 Israeli soldiers abducted, on Thursday evening, a young Palestinian man at the Za’tara military roadblock, south of Nablus, and a young man from Jenin, in northern West Bank.

Eyewitnesses said the soldiers abducted Hasan Nasrallah Sha’er, and searched his car after stopping him at the roadblock, and took him to a nearby military base.

His family said Hasan was driving his father’s car when the soldiers stopped and abducted him.

It is worth mentioning that Huwwara roadblock has recently witnessed various similar incidents, including the abduction of many young men, and the interrogation of dozens of Palestinians.

Furthermore, the soldiers abducted Nizar Mohammad Hanaisha, from Jenin in northern West Bank, while heading to his work in Jerusalem, and moved him to Huwwara military base near Nablus.