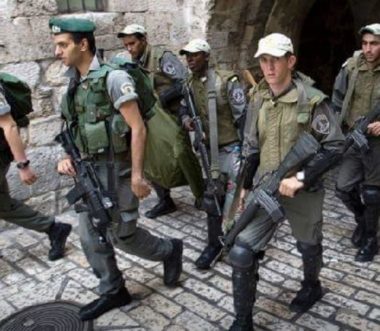 Local sources said the soldiers invaded Bab ar-Rahma Cemetery and its surrounding areas, attached to the wall of the eastern part of the Al-Aqsa Mosque, and forced the Palestinians out, before abducting one.

They added that the abducted man, identified as Nasrallah al-A’war, was taken to a nearby police base.

On Friday at dawn, the soldiers abducted, a young Palestinian man from Jenin refugee camp, and two others men from their homes, in the al-Yamoun town, west of Jenin.

In Hebron, in southern West Bank, the soldiers invaded the areas surrounding the Shuhada Graveyard, in the al-‘Arroub refugee camp, north of the city, and fired gas bombs and concussion grenades at several Palestinians during ensuing protests.