Israeli Settlers to be Evicted from Al-Bakri Building in Hebron 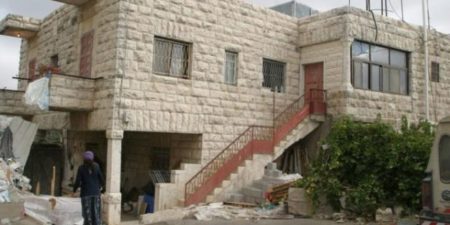 After a fifteen-year legal battle  in the corridors of the Israeli courts of various degrees, the Hebron Rehabilitation Committee has obtained a decision to evacuate a number of Israeli settlers from Al-Bakri building, in the Tel Rumeida area, in the Old City District of Hebron.

The case was considered by the Court of Magistrates, the Central Court, Supreme Court and Military Appeals Committee. HRC adopted the case through its legal unit and started proceedings to evict the Israeli settlers from the building in 2005. Emad Hamdan, General Director of the HRC, confirmed that the diligent follow-up, by the legal unit of the case, and its continuing challenge to the Israeli policy of taking over Palestinian property, led to the success achieved.

Tawfeeq Jahshin, HRC’s Advocate, stated that a special investigator was commissioned to identify the settlers squatting the building. They said that they took over the building and had left it for a long time. They also claimed that an Israeli Real Estate Firm purchased the building and used it after they had left.

Since then, the parties to the case changed and the lawfare was therefore submitted in 2006, whereby another case was filed against the Israeli firm (Tal). It alleged that it had purchased the building, and so the Court of Magistrate demanded that the case be filed with a competent Central Court, the proceedings of which lasted for years. After a long struggle, it was proved that all the deeds presented by the Israeli settlers were fake. In light of this, the Central Court confirmed that the Al-Bakri building belongs to the Al-Bakri Family, but Israeli settlers appealed the ruling before the Supreme Court, which endorsed the decision of the Central Court in 2014.

Before this, Israeli settlers filed a lawsuit with the Court of Magistrates, demanding that they be allowed to buy the building, and so the decision of the Supreme Court was put on hold. The proceedings of the Court of Magistrates were also lengthy, lasting for years. Prior to completion of the litigation proceedings, the settlers filed another lawsuit with the Central Court in which they alleged that part of the land on which the building is erected is Jewish endowment.

This case was dropped since it was not duly filed. The Court of Magistrates proceedings continued and it was decided to evict and fine them in 45 days, while the Supreme Court proceedings were still at their beginning. The settlers appealed the decision, and Israeli courts kept procrastinating the litigation proceedings, to lengthen the settlers’ control of the building and force the HRC to retreat.

After all of this legal processing, which lasted for a total of fifteen years, the Central Court turned over the settlers’ appeal and decided on eviction, in addition to fining them against their stay in the building.

PNN further notes that the decision to evict the Israeli settlers offers a ray of hope amidst the bleak conditions facing the Old City of Hebron, because of Israel’s colonial policies and decisions by the Israeli government to build a settlement outpost in different sites of the Old City, including Al-Hisba and the Old Garage lands. The Legal Unit of HRC challenges all the decisions taken by the Israeli government against Hebron and continues to do so in light of the complicated political situation.  Director General of HRC, Emad Hamdan, and Advocate Samer Shihada thanked the Legal Unit for its diligence in following up on this case and others of equal relevance.