Soldiers Assault A Blind Man in His Home, Near Bethlehem 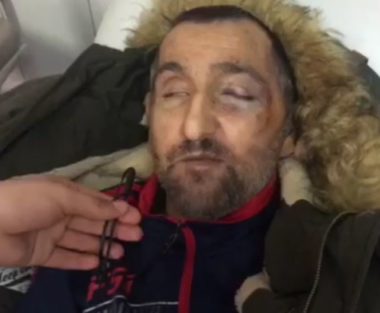 Israeli soldiers assaulted, on Wednesday at dawn, a blind Palestinian man who also suffers from a Kidney disease, after invading his home in Doha town, south of Bethlehem, in the occupied West Bank.

The Palestinian, Monther Mezher, told WAFA News Agency the soldiers stormed his home and started a violent search of the property, before beating him up on his head, shoulders and other parts of his body.

From his hospital bed, Mezher said that, besides his visual impairment, he cannot walk without help, and that he also has a kidney disease, requiring dialysis.

He stated that he lost his eyesight fifteen years ago and has been undergoing dialysis for the last eleven years.

“We heard some noises inside our house, my wife and I though it was one of our kids who might have woken up, we had no idea who was inside our home and what they were doing,” he said, “We first though that they were thieves, and they started beating me up while shouting at me ‘we are the Israeli Defense Force’.”

“They left me and went to the living room, and my wife helped me walk there; my children were forced against the wall, and I kept asking them what are they doing here, and what do they want, only then we released they also invaded the house above us to arrest a young man.”

The family of the young man told the soldiers not to invade Mezher’s home, because he is blind and sick, but the soldiers insisted on breaking into the property.

Mezher’s sister told WAFA that she rushed to the property to see her brother and his family and was shocked to see how her blind brother was beaten up and all bloody, and how the home was ransacked.

“When I saw what they have done to my brother, his family and home, I saw how those soldiers were behaving… like wild beasts, not human beings,” she added.

The attack came after many army vehicles invaded Doha, abducted two young men, and fired a barrage of gas bombs, causing one car to burn.

In related news, dozens of invaded the southern West Bank city of Hebron, al-‘Arroub refugee camp and the nearby Halhoul and Beit Ummar towns, before storming and searching many homes, and abducted eight Palestinians, including a child, in addition to summoning two others for interrogation.

Furthermore, the soldiers injured ten Palestinians, including a journalist, in Nablus, after dozens of soldiers and colonialist settlers invaded the city and headed to Joseph’s Tomb.