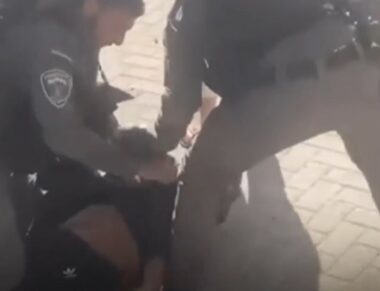 Israeli colonizers occupied, Wednesday, a Palestinian apartment in the Wadi ar-Rababa neighborhood in Silwan town, south of the Al-Aqsa Mosque in occupied Jerusalem before Israeli soldiers assaulted and abducted a young man who was protesting the takeover of his home.

The Wadi Hilweh Information Center In Silwan (Silwanic) said many colonialist settlers invaded the apartment and occupied it after forcing the family out under the protection of the soldiers.

It stated that the property is owned by Palestinians from the Froukh family, and added that a member of the family, a young man identified as Mahmoud Froukh, protested the takeover before many soldiers repeatedly assaulted him before abducting him.

It is worth mentioning that, in July of this year, the colonizers claimed ownership of the two-story building, before the family started filing appeals with Israeli courts.

The colonizers are trying to occupy many buildings on seventy Dunams of Palestinian lands in the Wadi ar-Rababa neighborhood.