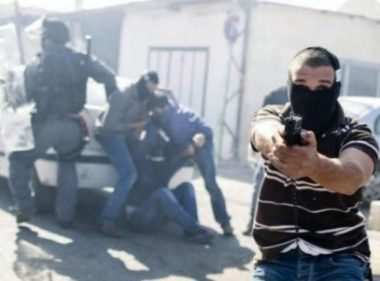 Media sources in Jenin said undercover Israeli soldiers ambushed a young man, identified as Islam Jamal al-Qonbo’, in front of the ar-Razi hospital in the city, and kidnapped him before taking him to an unknown destination.

They added that the undercover soldiers were using a car with Palestinian license plates when they ambushed and kidnapped the young man, and took him to a nearby military base.

Also in Jenin, the soldiers invaded Arraba town, southwest of the city, and summoned Shaddad and his brother Raddad al-‘Arda for interrogation at the Salem military base.

The two are the brothers of Mahmoud al-‘Arda one of the six detainees who managed to escape the high-security heavily fortified Gilboa Israeli prison, last month, before they were captured a week later.

On Wednesday at dawn, Israeli soldiers abducted, nineteen Palestinians, including a child, and three siblings, from their homes in several parts of the occupied West Bank; ten of the abducted are from occupied Jerusalem,