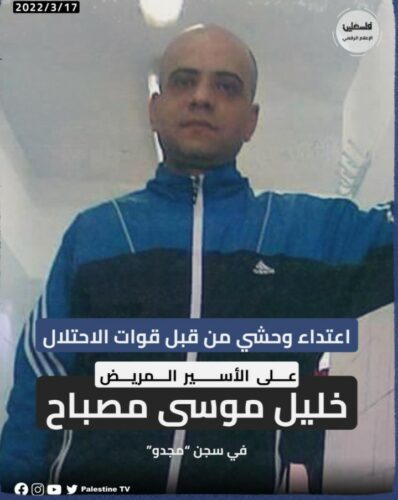 The PPS said the detainee, Khalil Mousa Misbah, from Jenin refugee camp in northern West Bank, was assaulted by several soldiers in his solitary confinement cell in Megiddo prison.

It added that Khalil, who was abducted in 2003 and sentenced to twenty years in prison, is one of the dozens of ailing detainees subject to constant violations and denied the right to proper medical treatment.

Khalil has several chronic health issues, including in his bowels, stomach, and blood vessels, and requires frequent medical treatment and monitoring.

The PPS said that Misbah has been transferred to several Israeli prisons at least four times and is constantly placed in solitary confinement.

The PPS said the escalating Israeli violations are part of illegal policies targeting the detainees and their fundamental rights.

It held the Israeli Prison Authority responsible for Khalil’s life and called on various legal and human rights groups to intervene and end the constant Israeli violations of fundamental rights guaranteed by International Law and the Fourth Geneva Convention.