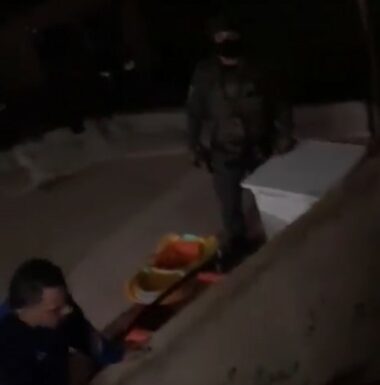 Monday, November 22, 2021 (WAFA) – Israeli forces Monday overnight detained 19 Palestinians and assaulted several others in various parts of the West Bank, according to local and medical sources.

They said that Israeli forces rounded up seven Palestinians from the northern West Bank district of Tulkarem.

One of the seven detainees was identified as a former prisoner from Nur Shams refugee camp, east of Tulkarem city, three others, including a former prisoner, from Qaffin town, northeast of the city, two others from Deir al-Ghusun town, and the other from the city.

In Tubas district, the soldiers detained another after ransacking his parents’ house in Wadi al-Far’a village, southwest of the city, as confirmed by the Director of the Palestine Prisoners’ Society (PPS), Kamal Bani-Odeh.

While in the village, the soldiers ran over a young man, inflicting cuts and bruises across his body. The casualty was rushed to a hospital for treatment.

In Jerusalem, Israeli police rounded up two others, forcibly entered and searched their houses in the Wadi Qaddoum neighborhood of Silwan, turning the houses upside down.

They also barged their way into the Rashidiyya School for Boys, fired stun grenades towards and assaulted group of students and eventually detained an 18-year-old student. Police also stormed the home of Jerusalem Governor, Adnan Ghaith, fired stun grenades inside, searched the house and assaulted him along with his family members, inflicting cuts across their bodies.

They rounded up three of Ghaith’s relatives after brutally assaulting them and led them to the jeeps that were parked outside the house.

The sources confirmed a similar military raid in Qalandia refugee camp, north of Jerusalem, resulting in the detention of five others.

Under Israeli military law army commanders have full executive, legislative and judicial authority over 3 million Palestinians living in the West Bank. Palestinians have no say in how this authority is exercised.