Soldiers Assault Three Children While Abducting Them, And During Interrogation 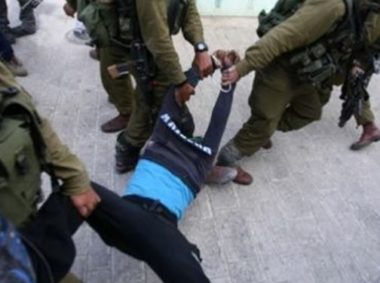 The Palestinian Detainees’ Committee has reported, Wednesday, that Israeli soldiers repeatedly assaulted three children while abducting then and subjected them to torture during interrogation.

The Committee stated that the soldiers abducted Bara’ Yousef, 16, from Hijja town, near the northern West Bank city of Qalqilia, after storming his family’s home late at night, and ransacking it, causing serious property damage.

It added that the soldiers then dragged Bara’ to their jeep, and while transferring him to the al-Jalama interrogation center, they constantly kicked and punched him.

The child was then interrogated for several hours and was forced to stand against the wall for a long period. He spent a total of fifteen days in solitary confinement before he was moved to Majeddo prison.

The soldiers also assaulted Omar Salim, 17, after storming his home in Azzoun town, east of Qalqilia, and dragged him out of the property while kicking and beating him, and once they placed him in their jeep, the soldiers repeatedly stomped him with their heavy military boots.

The Committee stated that the soldiers moved Salim to their base in Karnei Shomron illegal colony, where he was strip-searched him, and held for several hours in a container while his hands and feet where bound.

He was later moved to the police station in Tzofim illegal colony, where he was interrogated, and was then moved to Majeddo prison.

Furthermore, the soldiers abducted Abdullah Mansour, 15, from his home in Jenin refugee camp, in the northern West Bank city of Jenin, after they smashed the door of the property and stormed it while shouting at him and the family, and dragged him outside before cuffing and blindfolding him.

The soldiers continued to assault the child in their military base, and held him in a container for several hours, before transferring him to Majeddo prison.

The Israeli violations against the Palestinian detainees, including detained children, are direct violations of International Law and several articles of the Fourth Geneva Convention, in addition to various human rights agreements on the protection of civilians, especially the children.