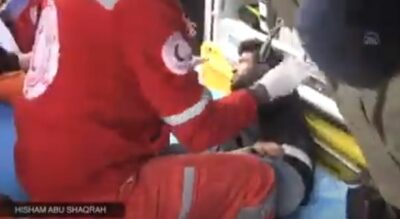 Israeli soldiers attacked, on Tuesday evening, Palestinian medics and attempted to abduct a wounded young man from their ambulance, at the Tayasir military roadblock, in the West Bank’s Northern Plains.

The soldiers stopped a Palestinian ambulance at the roadblock, before breaking into it and attempted to abduct a young man, who was shot by army fire during protests near the roadblock.

The soldiers also assaulted the medics, who were just trying to ensure the safety of the wounded young man.

The ambulance eventually managed to cross the military roadblock and moved the wounded man to a Palestinian hospital.

Palestinian Health Minister, Dr. Mai Al-Kaila, slammed the attack and stated that people around the world can see this serious violation, captured on video.

“This is one of the ongoing and escalating Israeli violations that disregard human life, and international humanitarian laws,” she added, “Medical teams, ambulances, hospitals, and patients must be protected at all times, and should not be subject to any form of danger or violation.”

The incident took place after the soldiers attacked hundreds of Palestinian demonstrators, striking 6 with tear-gas canisters, while dozens more suffocated on tear-gas.

National factions mobilized a large gathering of peaceful Palestinians to express their condemnation of the Israeli occupation authorities’ destruction of Khirbet Hamsa al-Foqa village, on November 3, 2020.