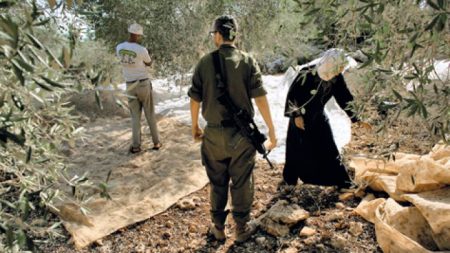 Israeli soldiers, on Sunday, attacked and wounded two Palestinians who were picking olives in the village of Kafr Qaddoum, east of Qalqilia, according to local WAFA sources.

Witnesses said that the soldiers attacked two farmers, identified as Abdul-Mahdi Hekmat, 16, and Qusai Aqel, 20, and also verbally assaulted them while they were tending their olive trees.

The soldiers also verbally assaulted Hekmat’s wife, and threatened her, her husband and Aqel  with death, should they approach their land once again.