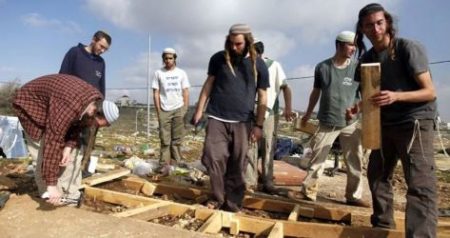 Israeli daily newspaper, Haaretz, on Sunday, said that Israeli settlers have a new community gathering near an Israeli military station in the northern part of the valley, five kilometers away from two other settlements.

According to the newspaper, PNN reports, the settlers arrived in the area two months ago, built a “tabernacle” and left. A few days ago, they went back to the area, leveled the land and began to build, as seen by local eyewitnesses.

Israeli authorities say that the building is illegal and does not have permits, and that construction will be halted, equipment possibly confiscated.

This is the second community being built by Israeli settlers within the past two months, it was further noted. One and a half months ago, Israeli settlers started building units in the same area, before it was exposed also by the media outlet.