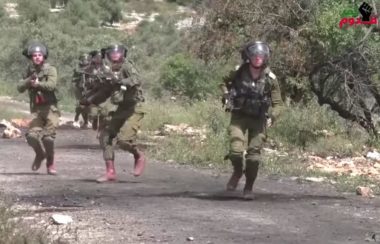 Israeli soldiers attacked, Friday, the weekly procession against the Annexation Wall and Colonies in Kufur Qaddoum village, east of the northern West Bank city of Qalqilia, and shot one Palestinian with a gas bomb in his back.

Dozens of locals, accompanied by international peace activists, marched from the center of the village, while chanting for liberation, independence and the removal of Israel’s illegal colonies and the Annexation wall.

Morad Eshteiwi, the media coordinator of the Popular Committee against the Wall and Colonies in Kufur Qaddoum, said the soldiers attacked the protesters with rubber-coated steel bullets, gas bombs and concussion grenades.

One Palestinian was shot with a gas bomb in his back and received the needed treatment in the local clinic.

Eshteiwi added that the soldiers invaded a home and tried to use it to ambush the protesters, but the locals noticed them, before they left the property and fired at protesters who hurled stones at them.