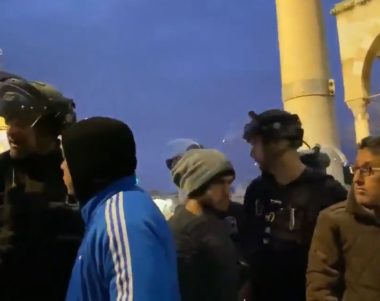 Israeli soldiers assaulted, on Friday at dawn, dozens of Muslim worshipers in the Al-Aqsa Mosque, in the occupied Palestinian capital Jerusalem, injured at least ten, and abducted three.

Media sources said the Israeli army and the police stormed the courtyards of the Al-Aqsa Mosque compound and fired many concussion grenades and rubber-coated steel bullets at the worshipers while trying to force them away.

They added that at least ten Palestinians were shot with rubber-coated steel bullets, and many others suffered the effects of teargas inhalation.

Most of the wounded Palestinians were shot in the lower extremities, and received treatment by the medics, while one of them was moved to a medical center for further treatment.

Eyewitnesses said the army, and the police, tried to prevent hundreds of Palestinians from entering the mosque, by setting roadblocks and extensive deployments.