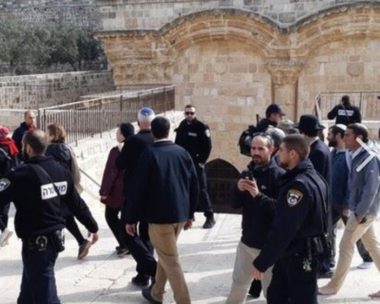 Israeli soldiers attacked, late on Saturday at night, many Palestinian Muslim worshipers in the al-Aqsa Mosque, in occupied Jerusalem, and forced them out of the holy site’s compound.

The Islamic Waqf and Endowment Department said dozens of Palestinians choose to spend nights in the Al-Aqsa Mosque, especially during the current holy Muslim month of Ramadan, but the army has been repeatedly invading it and using force to remove them.

It added that the soldiers attacked many worshipers, before forcing them out of the holy site.

In related news, dozens of worshipers prevented the soldiers and the police from invading the Al-Aqsa al-Qadim Mosque, in the Al-Aqsa Compound, by throwing their shoes at them.

It added that such violations are meant to exert Israel’s illegal control of the holy site, by violating the rights of the Muslims to stay in the compound without restrictions.

On Sunday morning, Israeli Agriculture Minister, Yuri Ariel, invaded the Al-Aqsa Mosque along with at least 17 colonialist settlers, accompanied by dozens of police officers and soldiers, through the al-Magharba Gate, and conducted a provocative tour in the holy site’s courtyards.

In related news, Israeli police officers uprooted many olive saplings that were planted by the Palestinian worshipers in Bab ar-Rahma area, in the Al-Aqsa Compound.