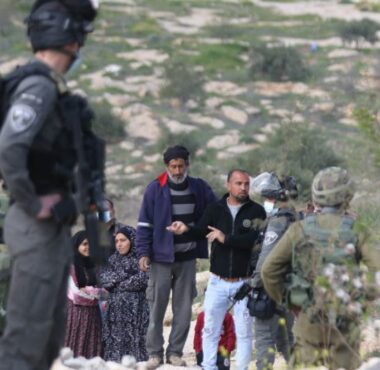 Israeli soldiers chased, Monday, Palestinian shepherds in the ath-Tha’la area, in Masafer Yatta, south of the southern West Bank city of Hebron, and prevented them from reaching water wells in the area.

Fuad al-‘Amour, the coordinator of the Protection and Steadfastness Committees in southern Hebron, said the soldiers chased the shepherds and prevented them from reaching wells in the area to provide water for their sheep.

He added that the soldiers forced the Palestinians out of the grazing area, while illegal Israeli colonists also chased shepherds from the local al-Hathalin and Shinran local families.

On Monday morning, Israeli soldiers and personnel of the “Environment Protection Authority,” confiscated more than 100 sheep from a Palestinian shepherd in a Janba grazing area, east of Yatta town, south of Hebron.

The assailants came from Shvut Rachel illegal colony, which was installed on stolen Palestinian lands, owned by residents of Qaryout.