Soldiers, Colonists Block Palestinian Farmer from Working on his Land 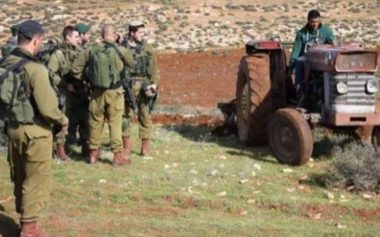 Israeli forces, with the help of illegal colonial settlers, on Saturday, blocked a Palestinian farmer from working on his own land near Kifl Hares, west of Salfit, in the northern West Bank.

Al-Qaq added that a new illegal outpost was established a short time ago, which carries the possibility of a fully developed illegal colonial settlement on Palestinian-owned lands.

In related news, the Israeli occupation authorities delivered a demolition order against a Palestinian-owned structure in the northern Jordan Valley, according to a local official.

Aref Daraghmeh stated that the army invaded Khirbet Yarza hamlet, east of Tubas, and handed Salem Masa’eid a notice of intent to demolish the structure, under the pretext that it was built in an archeological area.