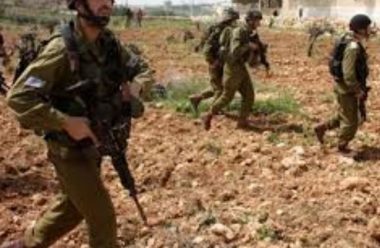 Ghassan Daghlas, a Palestinian Authority official who monitors Israel’s illegal colonialist activities in the northern part of the occupied West Bank, said the soldiers posted a military order with maps, informing the Palestinians that the lands will be confiscated for “military purposes.”

He said that the lands are close to Burin Secondary School and added that the illegal confiscation also threatens more Palestinian lands in the area.

It is worth mentioning that the army decided to confiscate the lands two months ago, when it started bulldozing a section to install a fence separating the school, along with nearby lands, from the main Qalqilia-Nablus road.

In related news, a group of illegal Israeli colonizers attacked many Palestinian farmers, and cut olive trees, in the as-Sawiya village, south of Nablus.

The assailants prevented the Palestinians from plowing their lands, and destroyed approximately 40 olive trees, owned by members of Salman family.