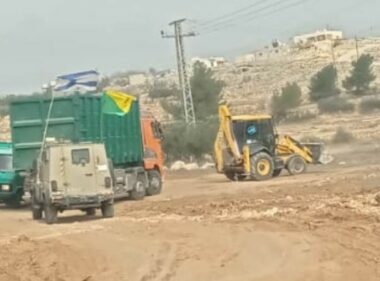 On Friday, Israeli soldiers confiscated vehicles belonging to the Ath-Thaheriyya Town Council, south of Hebron in the occupied West Bank, while working on lands owned by the Council.

Media sources said the soldiers confiscated a digger and a waste truck in the Al-Baha area, in the eastern part of the town.

The sources said the soldiers pointed their guns at the workers and forced them to stop before confiscating the vehicles.

The Town Council said that the attack is not the first, as the soldiers confiscated three of its vehicles over the past two days, and added that the illegal Israeli colonizers also constantly attack its workers and the residents in the area.

The Council said it is trying to do infrastructure work to help the residents in the eastern areas of the town by providing them with better streets and essential infrastructure, especially since they live in areas subject to frequent violations by the army and the colonizers.