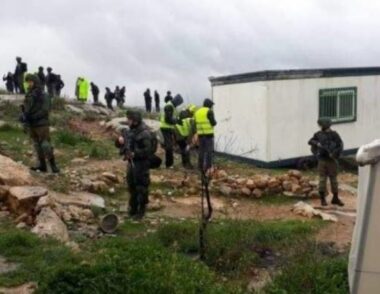 Israeli soldiers confiscated, Tuesday, two caravans in Susiya Palestinian village, south of Hebron, and a tractor in the Northern Plains, in the occupied West Bank.

Jihad Nawaj’a, the head of Susiya village council, said the soldiers invaded the Wad ar-Rakhim area in Susiya village, east of Yatta, south of Hebron, in the southern part of the West Bank.

He added that the soldiers confiscated two caravans, owned by Ahmad Nasr Da’ajna, on his land in Area C of the occupied West Bank.

It is worth mentioning that the soldiers also abducted a young man, identified as Nasr Hisham Natsha, 28, after storming and ransacking his home in Hebron city.

In addition, the soldiers invaded Bardala village, in the Northern Plains of the West Bank, and confiscated a tractor, owned by a local farmer, identified as Ezzat Ahmad Khneifis.