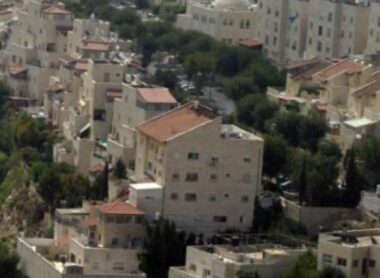 The Israeli government started the construction of dozens of new units in the illegal Gush Etzion bloc, south of Bethlehem, in the occupied West Bank.

Israeli sources said the constructions include 96 units in a new “neighborhood” that would be the first to be built since the year 1999.

The sources added that the preparatory work aims at building a new permanent neighborhood, in a small settlement, known as Ibei Hanahal, in the southeastern part of Gush Etzion.

A spokesperson of the Gush Etzion block said the work has begun to construct the 96 new units in the colony.

Ibei Hanahal was first established in the year 1999, where a few Hasidic families started residing, however, over many years, several young families settled there, increasing the current number of families to fifty.

In August of 2019, the colony was officially registered and received the approval of the so-called Land Authority.

All of Israel’s colonies in the West Bank, including those in and around occupied Jerusalem, are illegal under International Law, the Fourth Geneva Convention in addition to various United Nations and Security Council resolutions.

The construction of settlements in the occupied Palestinian territory constitutes a war crime under international humanitarian law.