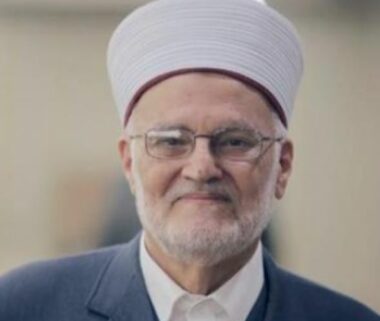 Israeli intelligence officers handed, Monday, Sheikh Ekrima Sabri, the Khatib of the al-Aqsa Mosque in the occupied Palestinian capital Jerusalem, an order barring him from traveling for four months.

Media sources said Sheikh Sabri received the order after denouncing Israel’s escalating violations against the Palestinians in Jerusalem, especially the recent assaults and abduction of many Palestinians in and around Al-Aqsa since the beginning of the holy Muslim month of Ramadan.

The sources added that the order was issued by the Israeli Interior Minister Arye Deri, who accused Sabri of incitement.

It is worth mentioning that Sabri said the escalating violations against the worshipers in Al-Aqsa are only leading to further tension and added that the Palestinians will continue to defend the holy site and their legitimate rights, including the freedom of worship.

He also slammed Israel violations, including the cutting of the wires that were hooked to the speakers of the holy site, to prevent the calls for prayers, and added that the attacks against the Palestinians in Bab al-Amoud, Bab as-Sahera, and Salahuddin street, targeting the Palestinians who are entering or leaving al-Aqsa are just leading to further tension and escalation.

It is worth mentioning that Israel issued more than ten similar orders against Sheikh Sabri over the last few years.