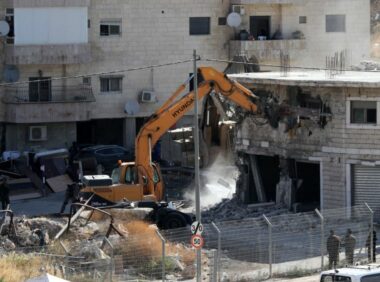 Media sources said several army and police jeeps invaded the neighborhood accompanied by a bulldozer and demolished the property.

They added that the City Council in occupied Jerusalem is alleging that the building was being constructed without a permit.

The demolished property was around 90 square meters, owned by Saifuddin Ali Jom’a, in the Shayyah area.

|If You Build It, They Will Come: B’Tselem|

Last week, the United Nations Office of the Coordination of Humanitarian Affairs (OCHA) for the Occupied Palestinian Territory has reported that Israel demolished or seized 100 Palestinian-owned structures, a sharp increase compared with previous months and the highest figure since January 2017. As a monthly average, the number of structures targeted during the first half of 2020.

OCHA also stated that Israel has, so far this year, demolished 371 structures in the West Bank, including Jerusalem, displacing 412 Palestinians.

In addition, the Israeli Committee Against House Demolition (ICAHD) has reported, on July 6th, that Israel has demolished 101 structures, displacing 137 Palestinians, and affecting 435 others, in June.

In the year 2019, the army demolished 623 structures, displacing 914 Palestinians in the occupied territory.