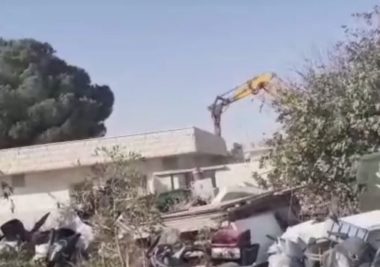 On Tuesday, Israeli soldiers and personnel of the City Council, demolished a Palestinian home in the Industrial Zone area near Qalandia town, north of occupied East Jerusalem.

Media sources said several army jeeps, and bulldozers, invaded the area, and surrounded a home owned by members of Bazian family, before forcing them out of their property.

The Wadi Hilweh Information Center in Silwan (Silwanic) has reported that the soldiers demolished the home under the pretext of being built without a permit from the so-called “Civil Administration Office,” the administrative and executive branch of Israel’s illegal occupation of the West Bank, including occupied Jerusalem.

According to the Israeli Information Center for Human Rights in the Occupied Territories, the army demolished 140 Palestinian homes and structures in Jerusalem governorate since the beginning of this year until September 1st.