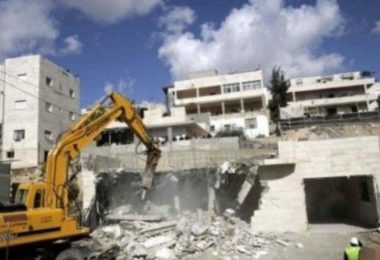 Hasan Breijiyya, the head of the “Colonization and Wall Resistance Commission,” stated that several army jeeps invaded the area, after surrounding it.

He added that the soldiers then proceeded to demolish an under-construction home, owned by a Palestinian from Sur Baher village, southeast of occupied East Jerusalem, allegedly for being built without a permit from the Israeli “Civil Administration Office.”

On Thursday at dawn, the soldiers invaded several Palestinian communities in the West Bank governorates of Qalqilia, Tulkarem and Nablus, searched and ransacked many homes, before abducting nine Palestinians, and injured one.

On Wednesday at night, a Palestinian child suffered a fracture in one of his arms, after Israeli soldiers invaded his home in Hebron city, in the southern part of the occupied West Bank.