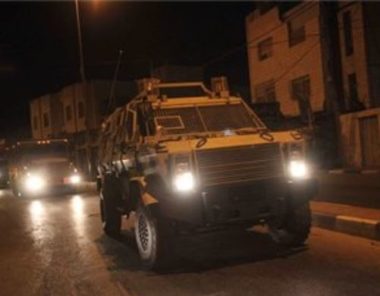 Israeli soldiers invaded, on Thursday at dawn, several Palestinian communities in the West Bank governorates of Qalqilia, Tulkarem,  Nablus and Jenin, searched and ransacked many homes, before abducting eleven Palestinians, and injured one.

During the invasion into Qaffin, several Palestinian youngsters hurled stones at the military vehicles, while the soldiers fired a barrage of gas bombs and rubber-coated steel bullets.

A few Palestinians suffered the effects of teargas inhalation, and one teen was shot with a rubber-coated steel bullet, before the soldiers rushed him to Thabet Thabet Hospital.

On Wednesday at night, a Palestinian child suffered a fracture in one of his arms, after Israeli soldiers invaded his home in Hebron city, in the southern part of the occupied West Bank.