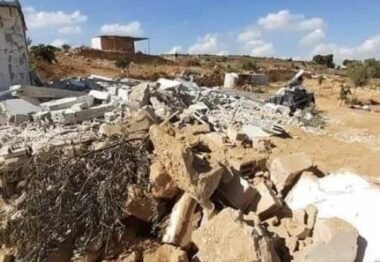 Fuad al-‘Amour, the coordinator of Protection and Steadfastness Committees in Masafer Yatta and Southern Hebron hills, said the soldiers demolished the home, owned by members of Dababsa family, in the area between two Bedouin communities.

He added that, a month ago, the soldiers demolished all water networks which were used by various Bedouin communities along the area that extends from Khallet ad-Dabe’ until al-Mafqara, in Masafer Yatta.

Al-‘Amour also stated that the army has been targeting many Palestinian homes and structures, in addition to preventing the residents from building or even tending to their lands, and depriving them access to electricity and running water, to force them to leave, so that Israel can use the lands to build and expand its illegal colonies.