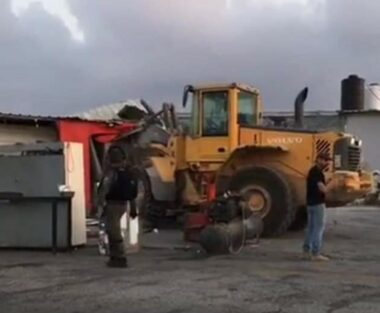 Several Israeli army vehicles, including bulldozers, invaded the town of Ya’bad, southwest of the northern West Bank city of Jenin, earlier on Monday morning, and demolished three commercial structures and a water tank.

The Mayor of Ya’bad, Samer Abu Bakr, told the Palestinian News & Info Agency (WAFA) that the soldiers demolished three commercial structures at the southern entrance of the town.

He added that the structures are owned by Mohammad Khaled Atatra and Omar Zeid al-Kilani.

In addition, the soldiers demolished a water tank, owned by Palestinians from the local Sha’er family, near the main road between Ya’bad and Arraba towns.

Many Palestinians protested the invasion and the demolitions, and hurled stones at the military vehicles, while the soldiers fired gas bombs and concussion grenades at them, causing a few to suffer the effects of tear gas inhalation.