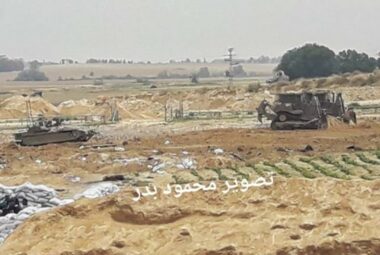 Local sources said six tanks and armored bulldozers, stationed at a military base across the perimeter fence, invaded Palestinian farmlands near the fence, east of the al-Maghazi refugee camp.

They added that the soldiers bulldozed sections near the fence, and installed sandhills.

The soldiers also fired firing sporadic rounds of live ammunition and smoke bombs during the invasion.

On Saturday, the soldiers fired many live rounds and concussion grenades at Palestinian farmers and fishing boats in Gaza.

In the West Bank, the soldiers abducted, on Monday at dawn, eight Palestinians; two from the al-Am’ari refugee camp, in Ramallah, and six in Beita town, south of the northern West Bank city of Nablus.