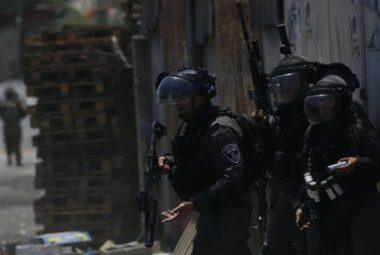 Media sources said dozens of soldiers invaded many neighborhoods in the town before the army stormed and ransacked homes, in addition to interrogating dozens of residents while inspecting their ID cards.

They added that calls were heard from the loudspeakers of the local mosques advising the Palestinians to remain alert, especially as groups of colonialist settlers gathered near the village, while the soldiers invaded it.

On Saturday at night, the soldiers shot one Palestinian with live fire, and nine with rubber-coated steel bullets, in addition to causing several to suffer the effects of teargas inhalation in addition to cuts and bruises, during a procession to pressure the army to transfer the corpse of Shadi Omar Salim Shorafa, 41, to his family to conduct the proper burial ceremony.

Shadi was killed on July 27, 2021, near Beita Junction, south of the northern West Bank city of Nablus. The attack led to protests, where Israeli soldiers injured at least 49 Palestinians.

The Palestinian oversaw water resources at Beita Town Council; he was heading back home from work when the soldiers shot and killed him.